Epicurious posted an article about fairy bread. It was… quite something. Here I liveblog my response. 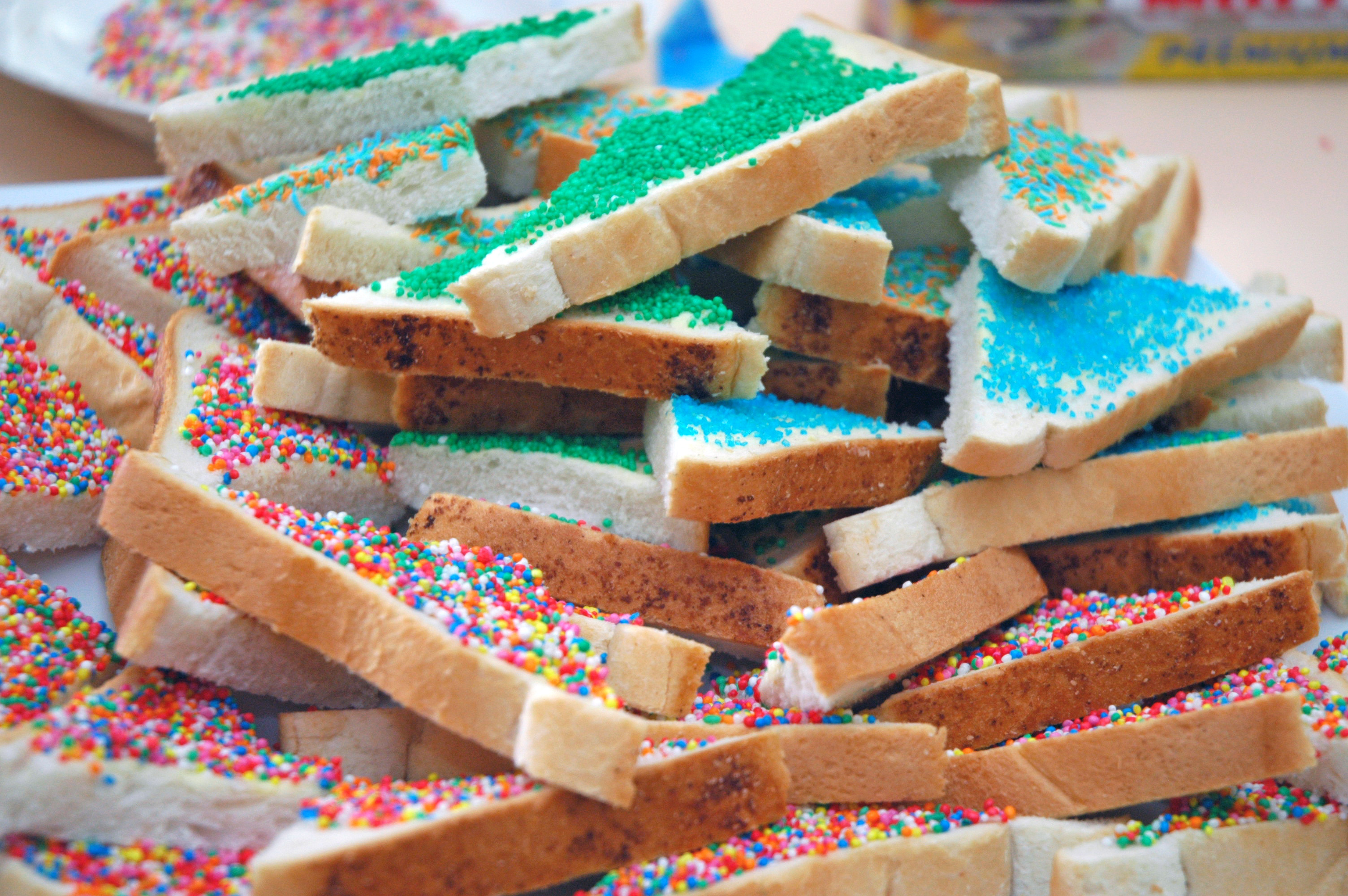 This is an accurate photo of fairy bread. This is not the photo Epicurious used.
By Gemsling – Own work, Public Domain, Link

Ooh! An article about fairy bread! I can already feel the nostalgia for every kid’s birthday party in primary school except mine, because Mum wasn’t into processed foods. While I’m airing grievances did I mention we were only allowed one teaspoon of Milo in our milo, that’s not milo that’s just vaguely brown-coloured milk.

The cover photo is cute, but what’s with the long hundreds & thousands? Is this one of those weird regional variations, like how apparently in parts of New South Wales they call “slides” “slippery dips”? (True confessions: a friend once called a slide a slippery dip and I have never been able to get over it. 70 years from now we’ll be in nursing homes and every few months I’ll be hologram-calling him or whatever, to say you really call a slide a slippery dip?)

And is that confetti on the lower-right one?

“[T]he name gives it an air of complex, unknowable magic”. Sure. Whatever. If you’ve read this blog a while, you know how I feel about purple prose food writing. Also, apparently fairy bread is “sparkly and fun and colorful and weird”? That’s several orders of magnitude more whimsical than I’d have thought fairy bread warranted.

I’m getting worried… “a slice of bread generously spread with butter”. Butter..? I mean, I suppose if you live in some kind of dystopian future that doesn’t have margarine, that sickly yellow margarine that doesn’t taste anything like butter or like vegetable oil or like anything edible really. That is what you use for fairy bread. But if you don’t have that, I suppose you could use butter. If you really had to.

Oh hey, it’s that food-writing paragraph about the history of the dish. Fairy bread was inspired by a Robert Louis Stevenson poem. Not by a mother of school aged kids saying will you stop whinging about how hungry you are, you know where the fridge is, fer cryin out loud.

And we eat it “as breakfast”. I dunno, maybe other kids did eat it for breakfast and it was just my healthy eating mother who made me have cornflakes instead. We also eat it “after dinner” — yeah nah, in my family it was tinned peaches and evaporated milk if we were lucky.

But more to the point… Toast. What. “Fairy toast”. No.

Isn’t the purpose of fairy bread — to get all food-writerly — to show off the varied textures of the ingredients: the chewy soft white crap-bread, the crunchy layer of hundreds and thousands that are slowly dissolving into the slick greasiness of the margarine below them. How does toast possibly fit into that picture?

Effin’ toast. I am done.

Ok, I’m not quite done. They not only want me to use butter, they want me to make my own butter. Get out of here.

And “sparkly sanding sugar”. What even is that? I ask the friend who posted this on facebook. Probably a known carcinogen she replies.

“And don’t think you have to be a child to enjoy fairy bread: everyone deserves a little sparkle in their snack, even grown-ups.”

I mean, pasta, obviously, that’s pretty much the full extent of my cooking skills, but it’s amazing how my mind blanks when it comes to the question of what to put on said pasta.

So here, for future reference, are some dishes I know I can cook at short notice that are still nice enough to serve up to other human beings.