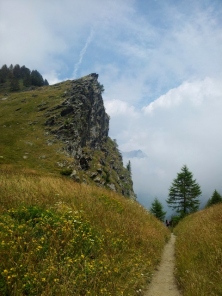 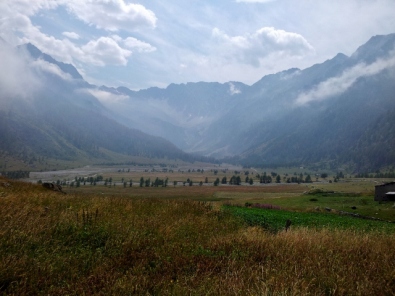 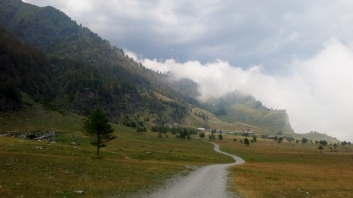 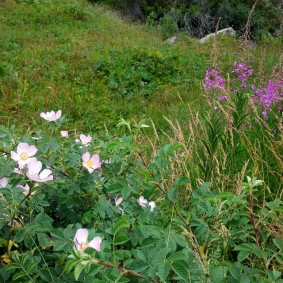 Went hiking with some friends and their kids yesterday in the foothills of the Alps. It was a sunny day and it was hot work following a narrow valley up, until we came over the ridge and found ourselves in the open space of Conca del Pra, a basin surrounded by jagged hills. On our walk we saw waterfalls, and wild roses, and cows, and raspberry patches, and flowers growing from the rocks that were reminiscent of hattifatteners, and entrances to mysterious caves where the air was cool and underground streams emerged. Our 4-year-old guide would probably want to add that we saw plenty of cool rocks and sticks and also he found an old shoe lace.

Practical information for future reference: We parked at Villanova, which is near Bobbio Pellice, which is a bit past Pinerolo as you head into the Alps in that direction from Turin. It was a popular spot — the tables at Rifugio Willy Jervis in Conca del Pra were full of people having lunch — which is not surprising considering it’s a beautiful place only 50 km from central Turin. There are 2 trails from Villanova to Conca del Pra, one that is a dirt road with a few shortcuts to save on tedious switchbacks, and the other that follows the other side of the stream and is much steeper and rockier (but definitely rewarding). We took the gentler route up and the steep route down, my knees today feel like that was maybe not the best order to do things… It’s also possible to drive up to Conca del Pra and use that as a starting point for hikes further into the hills.

3 thoughts on “Postcard from Conca del Pra: enjoying the foothills of the Alps”