It’s been a while since I’ve had a good baking disaster post — if you’re a newcomer to this blog you’d be forgiven for thinking I’m actually competent with food. (This is a false impression.) But today I have a story for the Oh My Goodness I Am Never Baking A Cake Ever Again What Was I Thinking files…

The story starts last weekend, with me idly thinking about the upcoming joint birthday party of two friends. It was a bring-a-plate affair, and I was considering what to bring. Something sweet, obviously, because that’s how I roll, but what? Cookies? Cupcakes? Would cupcakes be too close to cake to bring to a birthday party, like wearing a cream-coloured dress to a wedding? Wait a second, would they have actually organized a cake at that point? Could this be an opportunity to do something nice by baking a birthday cake? And an ulterior motive: living by myself, I almost never bake cakes because what would I even do with an entire cake, so this could be fun.

I texted them. They had not organized cake and would love if I made one. Chocolate and strawberry maybe?

I settled on baked cheesecake after flipping through my folder of recipes and spotting the back of a Philadelphia wrapper. That recipe wasn’t really what I wanted, but with some googling I found a convincing-enough white chocolate baked cheesecake recipe and a second recipe for strawberry sauce to put on top.

The last time I made cheesecake was more than 5 years ago in Australia, but I didn’t remember it being particularly difficult. So I was disconcerted to find a whole genre of baking blog posts about how to prevent your baked cheesecake from being an utter disaster. That post is actually fairly sane, but if you read too much of what comes up on Google for “baked cheesecake tips” you’d never even attempt one. You should bake it in a water bath! You have to beat the ingredients exactly the right amount or your cheesecake will be rubbery! You have to cool the cake at exactly the right cooling rate or it will spontaneously crack in two and one of the halves will explode!

None of these were my problem.

My first problem was one of scale. I’ve had this problem before, where I’ve forgotten that my large springform cake tin is really large. Like, 28 cm large. For my own future reference, that’s large enough that you have to double the quantities in a recipe written for a nice, normal 20 cm cake tin. It took me an embarassingly long time to figure this out (I… have a degree in mathematics). But I managed to buy enough ingredients in the end: a bit over 1kg of cream cheese, half a dozen eggs, and so on.

My second problem was where things started to properly go wrong. The day I made the cake, I had evening plans so I didn’t have a lot of time, but I’d left a decent margin to get the cake baked and started on cooling before I headed out. I’d been very good, and remembered to leave my cream cheese out of the fridge when I left for work in the morning, so I’d come home to nice room-temperature Philly, per all the cheesecake tips. I’d borrowed a friend’s electric mixer to make the job easy. I turned the oven on to preheat, started melting the white chocolate, and tipped the tubs of cream cheese into my big blue Ikea mixing bowl and got to work.

I’d added the sugar and a couple of eggs and was starting to think about the blog post I could write about how cheesecake tips are dumb when I noticed a blue speck in the mixture. “That’s odd,” I thought, and kept beating. I saw another speck. And another.

And then it dawned on me. Those specks were the same colour as my bowl. Because they were my bowl. Little pieces of my plastic mixing bowl, which had been shredded by the electric beaters. All distributed throughout my beautiful room-temperature well-beaten cream cheese.

I had a good minute or two of, Can I save this? But there was no way I’d get all the pieces, and  this was a cake for other people so I knew I should keep it non-toxic. In the end, I had just enough time to resolve never to bake a cake ever again, tip the ruined mixture down the toilet, then run to the shops, buy more cream cheese, and mix up the cake in a glass storage container. Which was not quite big enough: 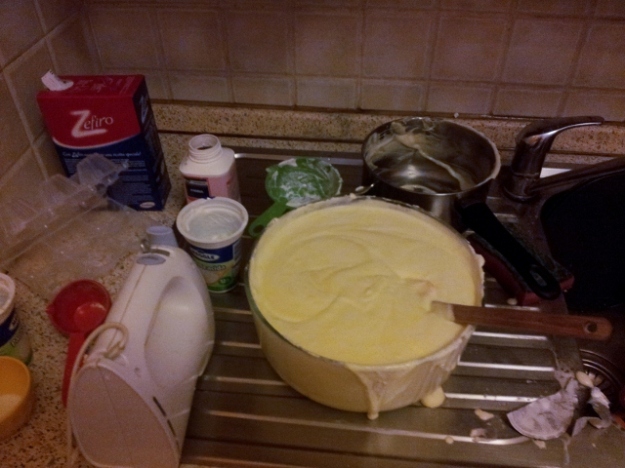 I think usually you’re suppose to be able to stir cake mixture without it tipping out of the bowl…?

The baking/cooling process was actually quite successful, with only a small crack forming. Unfortunately, this cake was nearly a foot in diameter and there was no way I could single-handedly get it from the cake tin to the cake carrier without the shear weight of it turning that single small crack into a long deep crack. I covered the top of the cake with strawberry sauce, which mostly hid the crack, except for where it fell into the crack and bled out the side of the cake in a slightly macabre-looking way.

Fortunately, I was beyond caring about aesthetics at this point. And from the other side, the cake looked quite pretty. And my “I’m never doing this again” resolve was reduced by at least 50% at the first “Oh wow thank you!!” I got when I arrived at the party with cake. And from the spoonful I tried while serving it up, it was pretty delicious. Will I bake a birthday cake again soon? No way. But I’d hesitate to say never…