It’s been one of those weeks where I’ve had lots of ideas for blog posts and nowhere near enough time or energy to turn any of them into reality. So this week will truly be a collection of snippets…

I often feel odd writing about the truly day-to-day stuff of living in Italy, especially since I know many of my friends here read this blog (hi guys!) and I can imagine them rolling their eyes and saying, “yeah, we know how to buy bread, duh.” But of course many of you don’t live here (why ever not??) so one of these days I should write a post about the process of getting a haircut when you don’t really speak Italian very well and the stylist doesn’t really care what you ask for anyway, because it’s fairly hilarious.

Also, a question for those of you who are better at Being an Adult than I am: do you trim your own fringe (bangs)? I do, because it feels silly to pay someone else to do it when I am in possession of a pair of scissors, a bathroom mirror, and only slightly below-average fine motor skills, but does this make me uncouth?

Last week was the Jazz Festival, and like I do every year, I fully intended to go to many concerts and ended up going to one. Or, half of one. I had a couple of house guests and we’d agreed to meet up Friday night at the free concert on Piazza Castello. The music was great, but after about 15 minutes, V. turned to me and said, “You know, this is really the sort of music you should listen to sitting down, with a glass of wine in your hand” — miming holding a stemmed glass — “not standing out here in the cold.”

So 10 minutes later the three of us decided to go back to my place and drink wine, instead.

(This is how many of my attempts at cultural experiences end up.)

My grand — and possibly only — achievement this weekend: I made a big pot of ragù and filled up a collection of freezer tubs so Future Me can eat nutritious food even when she can’t be bothered cooking. (Future Me is always so needy, geez.) I used this recipe (in Italian), because I was intrigued by the inclusion of milk and the use of white wine — I think I like it! And not just because I’ve got enough of the stuff to feed me for weeks…

Actually, the best achievement wasn’t making the ragù, it was realizing that I could roughly chop the carrot/celery/onion, and then throw it in the food processor to get a fine dice. I think this is something people who cook have known about since approximately the invention of food processors, but as a not-very-Adult person who trims her own fringe and doesn’t own a proper kitchen knife, this is a revelation.

If you’re friends with me on Facebook you’ve already been subjected to this joke but: 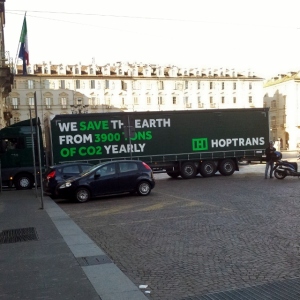 What, by driving a truck?

Finally, a question for locals — has this Spring been more green than last year, or am I imagining it? Somehow, last year was all about the blue of the sky, but this year I have become very aware of the green of the leaves of the plane trees visible in my bedroom window, and the grass as I walk through Giardini Reali or along the Dora river.

My two guesses at rational explanations are: 1. I really am imagining it; and 2. there was so little rain last year things were actually less green. Any other suggestions?

1 thought on “Green grass and pots of ragù and day-to-day life.”