My extremely glamorous expat life right now is more like my extremely busy life, so it might be a while before I write a coherent narrative blogpost again. Also, I am a terrible blogger anyway — Thursday evening I spent a couple of hours wandering through Salone del Gusto, an internationally-famous food show (aka obviously a good blog topic, slap bang in the middle of my “Turin life/food/things I do as an expat but wouldn’t have done back in Australia” niche) but I was too focused on free samples of cheese and booze to take any notes or photos for a blog post.

(I wrote about Salone 2 years ago, but this year they’ve moved it from the ugly horrible exhibition centre in Lingotto to outdoors in the centre of Turin, which is definitely a nicer setting. If you’re in Turin this weekend, you should go!)

For now, some notes on the rest of my life…

While every season is food season in Italy, autumn is even more food season. A couple of Sundays ago was our traditional pilgrimage to Asti for the Festival delle Sagre, a huge festival of Piedmontese food. Imagine an open space dotted with stalls, each representing a village in the area and selling one or two of that village’s specialties, plus wine at 50 cents/glass. And then throw in a Ferris wheel (why not), folk dancing demonstrations, and thousands of happy Italians with paper plates in their hands and wine in tumblers in holders around their necks.

This is the third year in a row I’ve been. Traditions have started to form, like starting the trip with friciula (fresh fried bread-y-pastry-y with lardo) from Mombercelli. “You reckon the friciula stand is in the same place this year?” “Come on, what do you think? We’re in Piemonte.”

(The friciula stand is near the centre of the festival grounds, as it always has been and always will be.)

Meanwhile, Facebook’s On This Day strikes again: a couple of days after the festival it reminded me of photos from the first time I went, 2 years ago. Of the group that went then, only 2 of us were there this year, because everyone else has since left the country. (Come back guys!!)

Two weeks ago, I had the bright idea to get back into running for stress-relief. No tracking distances or times, no pushing myself, just getting out there in the autumn evenings for fresh air and feeling less like a brain in a jar.

In those two weeks, I have already started noting distances run, decided it would be cool to work up to running 10 km comfortably in time for my birthday in November, and googled a bunch of 10k training plans… ZOE, NO.

But maybe I am getting better at relaxing? Earlier this month I went to the beach with some friends and actually enjoyed it rather than getting there, going for a swim, then drying off and going “uh, can we go do smething now?” 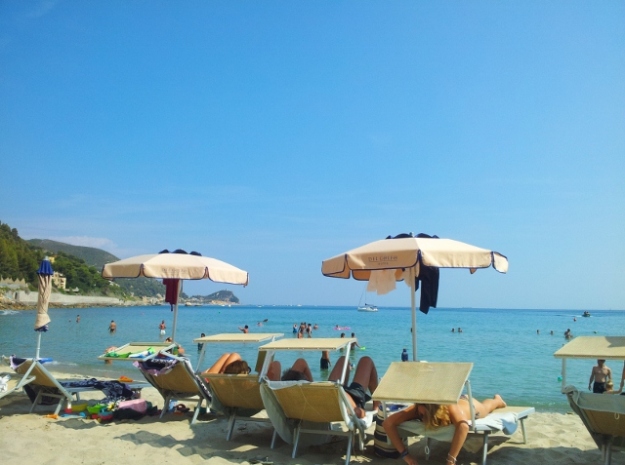 Possibly the secret was that these friends have two small children and I can attest the beach is much more fun if it’s socially acceptable for you to build over-engineered sand castles and collect a lifetime supply of mildy-interesting rocks. (Oh wow, that is a brown rock, isn’t it? Shall I put it with the other brown ones?)

(Practical note for future reference: we went to the private beach of Hotel del Golfo in Finale Liguria — the big advantage being that you can throw money at your problems and pay for parking, rather than drive up and down the Ligurian coast for hours looking for a spot. There’s a patch of public sand on the same beach as the private section, so you don’t actually have to pay for a chair if you prefer to bring your own. Parking/beach use is open to non-guests according to availability.)