Remarkably, I wasn’t sore at all when I got up in the morning, even after my long day the day before. Over a breakfast, I chatted with my B&B landlady, about her job doing night shift in a dementia care facility, and her four dogs that her husband was out walking, and how Perranporth used to have a really great New Age shop that she liked but now all the coastal villages were becoming nothing but surf shops and cafes. I knew what she meant — on my walk, I’d been struggling to even find lunch options each day that didn’t involve sitting in and paying 7 pounds for a sandwich with too many different ingredients.

At least there was a Tesco Express on my way back to the Coast Path and I stocked up on carrot sticks and hummus and fruit and chocolate for lunch that day. The path ran through city parks on the way out of town. Fortunately, there weren’t endless suburbs up the coast to contend with and soon I was out of town, though not without what felt like a very long trek past the music festival tent city. A few days later I met 3 German girls who had passed through Newquay the same time as me, and we agreed the visual effect of all those coloured domes was interesting in its own way.

Watergate Bay was a long stretch of beach leading away from Newquay. I opted to walk on the top off the cliffs and dodge joggers rather than down on the sands and dodge beach goers, who by 10.30 were already making a good showing. The cliff tops were covered with green grass and farms ran right to the edge. A man in a tractor was mowing a field and I could smell the cut grass as I walked past. Further along I saw sheep, who were unperturbed by the passers-by on the path.

I took a morning tea break at Mawgan Porth, which has a popular beach that I looked across as I drank a coffee. The visual effect of everyones’ wind shades was not so different to the festival tent city. I couldn’t decide if I would have preferred a more “natural” beach, or if I liked the pop of colour.

Back up on the cliffs, the coastal scenery continued spectacular. A nearly-cloudless sky arched over jagged rocks and narrow points. Ocean waves crashed against the cliffs. The sun was warm but an ocean breeze kept the heat away. 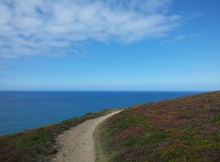 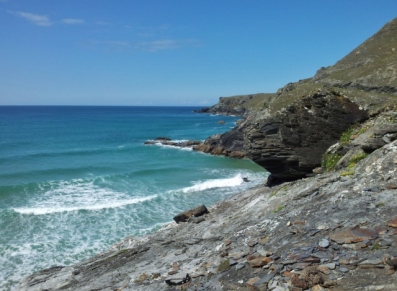 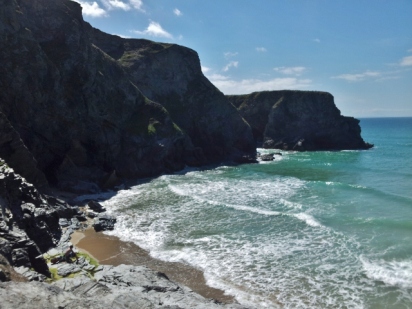 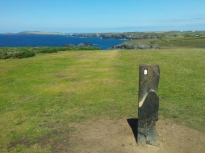 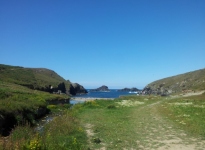 I shared this experience with scores of others out on the path enjoying a sunny Sunday. Except we didn’t share it, not really. Because there were so many of us, our only communication was a brief “thanks” if one person let another pass on a narrow section of path. Come lunch time, it was a battle to find a spot sheltered from the wind that wasn’t awkwardly close to other picnickers. I don’t resent that there were other people in the same bit of outdoors as me — I enjoyed my walk and I’m glad they had the chance to enjoy theirs too. But I imagine if I’d been walking outside of the summer tourism high season, there’d be a certain camaraderie with others, at least a, “Nice day for it,” but instead we were each in our own little clusters, trying to avoid getting in each other’s way.

As it was, I ate lunch on a rock shelf overlooking a rocky cove where a guy was having a break from surfing, and three of his friends were swimming in the ocean. I was out of the wind but still in the sun and I was getting hot enough that ocean swimming started to seem like a good idea — though not at this cove with decent swell and hidden rocks. I had no illusions about my strength as a swimmer. (I have never swum more than 25 metres of freestyle at a time in my life and my breaststroke, though it gets me from A to B, has laughably poor form.) 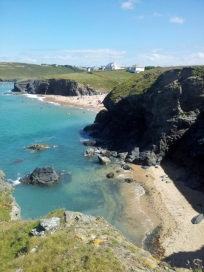 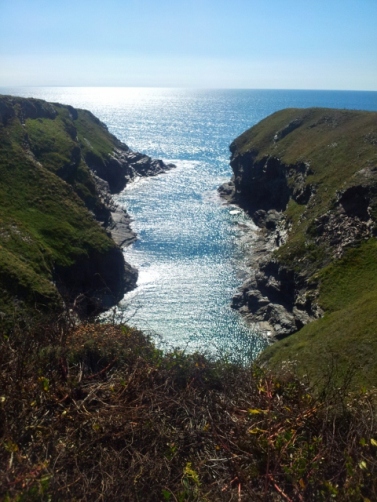 Later in the afternoon, at Porthcothan, I got my dip in the ocean. As expected, it was cold; it was beautiful. I made a minimal effort at drying off afterwards, and my damp clothes made for excellent evaporative air conditioning over the final 2 miles into Treyarnon Bay. That evening I realized I had sand everywhere, not just on me but also throughout my pack — when I had prepared for this walk, I had made sure I could keep everything dry in the rain, but in the end sand was my enemy.

That evening I ate an excellent hamburger from the hostel restaurant, washed it down with a cider, and watched the sun set over the ocean. (And watched the other beach-goers watch the sunset, too.) 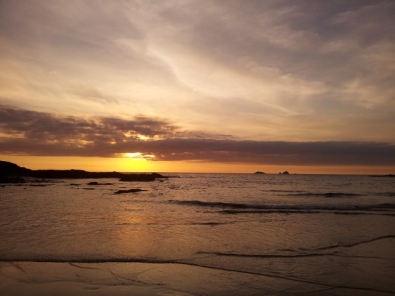 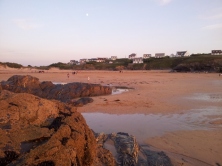 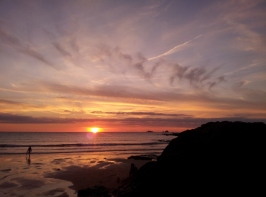 Go on to part 6 (Treyarnon Bay to Padstow)…