The long version of the title of this post ends with “if you are cheap and/or stubborn and/or enjoy travelling by train.”

I own up to being a bit of all 3, so last summer when I read on the inimitable seat61.com that there are train options from Trieste/Venice to Lake Bled despite there being no direct trains from Italy to Slovenia, I knew I had to give it a try on my summer vacation. Seat61 calls the route “cunning, cheap and scenic” which I’m pretty sure is just a more eloquent way of saying “budget/stubborn/train-y”. I’m also pretty sure there are simpler options that involve buses, but I don’t care. Here is my experience: 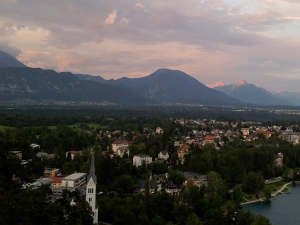 This is why you want to go to Bled.

I was coming from Turin, so my first step was to get to Venice. It’s possible to get tickets for the Frecciabianca from Turin to Venice for 29 euro if booked in well advance. Last minute tickets are 56 euro. This is the only ticket worth booking in advance for this trip and it is the most expensive part of the whole venture.

I got the 7:05 am train from Turin which was painfully early but I was excited about being on vacation so I probably couldn’t have slept late that morning anyway. I wish I could tell you what the scenery is like from this train but I have taken it 4 times now and always had bad weather.

I arrived in Venezia Santa Lucia at 11:40 am, which gave me 24 minutes to duck outside and check the canal still exists and buy a slice of train station pizza before getting on the 12:04 pm train to Gorizia. This is a regional train, so the ticket costs 15 euro regardless of when you buy it. If you wanted a couple of hours in Venice you could instead take the 2:04 pm train. The weather was still bad for most of this leg so again, no scenery report.

The tricksy part about this trip is that from Gorizia Centrale station, you have to get across town to Nova Gorica station which is actually on the Slovenian side of the border. Apparently back in the day when Italy claimed Gorizia as part of its territories, the Slovenians said “pffffff” and built Nova Gorica (“New Gorizia”) right next to it. These days, both countries are in the EU so the border doesn’t affect you as a traveller, and I got the impression the two town councils worked together on things like public transport and garbage collection.

There is a bus that links the two stations (info in Italian on the “city international line”, tickets are 1 euro). I decided to walk instead since I’d been sitting on trains for 7 hours at that point, and have a quick coffee on the way. What I didn’t factor in was that it was Sunday lunch time in a small Italian city and I very nearly didn’t find anywhere open. Also, the sun came out and it was humid from all the rain before. In retrospect, I should have taken the bus.

From Nova Gorica, there’s a train to Bled Jezero that leaves at 15:27. It runs directly and takes ~90 minutes. It costs 6.59 euro, and you can buy a ticket on board. (More info on timetables/costs.) The train was older than the Italian trains and was boiling hot on board until we got moving, since the temperature control was opening/closing the windows. I can vouch for this leg as being scenic:

From Bled Jezero station to Bled, where most accomodation is, is a nice walk along the lake front, maybe half an hour. I don’t really remember, because I got lost and went backwards and forwards a lot within Bled before I found where I was going. In retrospect I should have printed a map rather than saying “oh yeah, it’s in the village, I’ll find it.”

3 thoughts on “How to get to Lake Bled, Slovenia, from Italy, by train.”