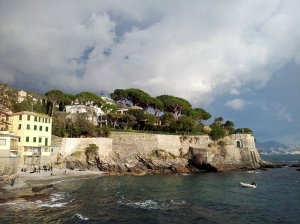 Near Nervi, a quartiere of Genova

Last time I was on the Ligurian coast it was August, and stiflingly hot and crowded. Now in February, I’d made a spontaneous day-trip, trying to escape the feeling of claustrophobia I was developing as a result of living inland after growing up in a city known for its sea breezes.

Despite being february, the sun was warm on my face and the breeze was cold, but pleasantly so. I unzipped the collar of my jacket and loosened my scarf. Dark clouds were coming in from the south east however, and the water was turning from blue to green-grey.

The beach itself wasn’t as empty as I’d expected. A mother was reading a picture book to her young daughter. A middle-aged couple wearing ear-muffs walked past me. He wanted to get an icecream, she wasn’t sure. A group of children were skimming stones in the water, and I heard one of them laugh with delight: she had just managed four bounces.

1 thought on “Notes from the beach in winter”